This combined IEC 61000-4-6 system that includes the RF signal generator, an RF-power amplifier, a 3-channel RF voltmeter and a directional coupler is available at a very reasonable price compared to the competition!

Overview
New test generator for all interference immunity standards against conducted Interference induced by high frequency fields – including BCI tests (ISO 11452-4).
One of the very few combined IEC 61000-4-6 test systems that include the RF signal generator, a RF-
power amplifier, a 3-channel RF voltmeter and a directional coupler for a very reasonable price.
The CDG 7000 generates interferences as defined in IEC / EN 61000-4-6 – immunity to conducted
disturbances induced by radio-frequency fields. The standard describes a test setup in which these high-frequency interferences can be influenced on a EUT without a complicated structure with antennas,field instrumentation and shielded rooms. By using coupling networks and coupling clamp’s sine waves are induced directly into power and signal lines. The test object retains its original place in the device structure, so that the system can be tested in its overall function. 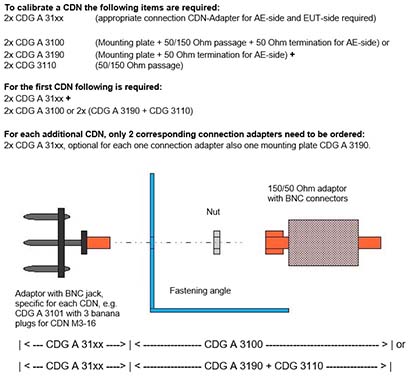 HELIA is a comprehensive program with which conducted RF immunity tests can be performed. It supports both the ubiquitous tests according to IEC/EN 61000-4-6 with the typical coupling media CDN and EMCL, as well as BCI tests according to the well-known MIL-STD 461 E/F/G, ISO 11452-4 or various automotive standards.