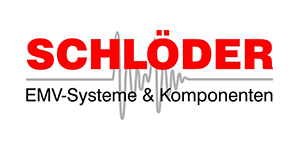 Accredited calibrations are now also offered in addition to the factory

The EMC Generators are equipped with latest generation of processors

World’s first automatic and effective solution for absorbing electrostatic charges from the test surface of the EUT. Possible with the generator SESD 30000 and available up to 30 kV for air discharge and contact discharge.

First 30 kV ESD generator worldwide with a self-test function. This function is essential for automatic tests.

Since January 2003, Timonta AG is a 100% subsidiary of Schurter AG – a Swiss company. Schlöder GmbH is now a distributor of Schurter AG.

Exclusive agreement with Kabelwerk Eupen AG, Belgium for the distribution of ferrite-coated cables and wires in Germany.

Schlöder GmbH was founded as a distributor company for EMC test- and measurement systems and EMC components. Mr. Friedrich Schlöder as the founder and CEO of Schlöder GmbH is a specialist in the field of EMC (Electro-Magnetic-Compatibility).